And until you have acquired an aptitude for easily seeing tones [values], it is not much use troubling too much about the shape of them.

I’m headed to Gen Con Indy this weekend with all my arts. If you’re going, stop by and say hi!

p.s. the art is an Ubuntu reference   /nerd

I haven’t been arting much recently, partially because of this guy! My new pal and roommate, Lefty Lyman, is an approximately one-year-old boxer mix. The fantastic Southern Hope Humane Society had no idea how he lost his leg. He crash-lands on the stairs sometimes, but other than that, he gets around fine!

Hey y’all – I’m going on a quick vacation, so I’ll be silent during the next week. I promise to come back with some photos and good stories!

Last weekend, I finally got up the courage to go out with my camera, local homicides be damned. It was a beautiful day – about 70 and sunny. The bulbs in my yard were blooming, and the trees were starting to bud. It had rained the night before, and the air was fresh and clean.

My SLR, two rolls of film, spare batteries, and I set off for the wooded area near our subdivision. It’s mostly a thin strip of trees between backyards and a busy road. Since I tend to traipse no matter where I live, I’d already been back there several times. Last summer, I found an entire army of wild blackberries.

This time I went farther than I had before, and was richly rewarded. I found beautiful, deserted areas of woods with leaf litter so deep that I sunk in with each step. Although it had rained, the leaves and needles were so thick that when I sat on the ground, I stayed dry. I found lots of the small wonders that I usually photograph, like pinecones, flowers, and birds. The bugs were scarce, since it was so early in the season.

I broke the boundaries of the “known” and hiked off into the unknown. I got some shots of chickadees who were too mad at me to fly away – they must have had a nest nearby. I found old evidence of carnage — piles of fur and a skull gnawed beyond recognition. I walked on and suddenly an owl lifted itself through the canopy, circled, and flew off. I think it was a Barred Owl. The only other time I’ve seen a wild owl was when my dad nearly hit one with the rental car while we were driving at 3am in Washington State. I saw a creek fall into an underground sinkhole and flow out 10 yards further down. I saw anthills as big as a burn barrel. I knew there were snakes around here, but I’d never seen one until today. It shook its rattleless tail at me for a few seconds before slithering into a hole in the ground. A sampling of what I saw, courtesy of Google Images:

I did get a few nice photos, but most of the beauty of the trip was in the experiences. Being outside, getting lost in nature within a mile of your house, losing 3 hours in an instant, watching birds’ courtship. Seeing the things I’d never seen before.

There’s beauty everywhere. It’s right under our noses, but we rarely see it.

This weekend didn’t involve any beer. *gasp* There was tequila instead – far too much of it. Back to beer next week.

The 2nd Annual Con on the Cob
COTC an awesome fantasy/art/gaming convention in Akron, OH. We just returned, worn out and happy. I learned a great deal about how art and conventions interact, so I’ll bestow upon you my learnings:

1. Mat, bag, & tag your art and layout your panels beforehand. Leave room to move things around, since your panel may be a slightly different size than expected. Also, the available attachment points may be spread out.

2. Bring your own binder clips or S-clips and tape. Bring every supply you think you might need, just in case.

3. If you have a lot of art, fill out the bid sheets before you arrive.

4. Get there early for a good spot (if it hasn’t been decided for you).

5. Hanging up a sign that says “prints available” doesn’t help much; you must go around telling people. Everybody. Multiple times. When someone says they like your art, say thanks, and oh by the way, I have prints for sale! And have them with you at all times.

6. Give out oodles of business cards.

7. Wearing your merchandise helps sell it.

9. Participate in as many art events as you can.

10. Be friendly to everyone.

11. Party and canoodle with other artists.

OK, now comes the bragging. N and I were introduced to miniature painting, which we both enjoyed immensely due to its brainless, soothing nature. He painted two little tiny dudes with teeth: 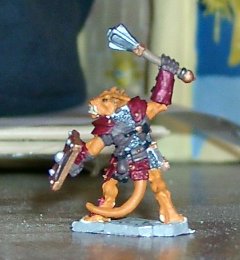 and I re-painted a larger undead tree model that came with a miniatures starter set I won at the raffle table: 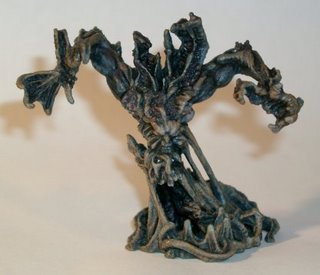 We both entered the miniatures painting contest, and I won best “large size” entry (of two whole entries) and N won best non-human AND best-of-show miniature! He won a highly esteemed Corny award!!

I participated in both the Quick Draw and Iron Artist competitions with many talented artists, including the illustrious Mr. Jeff Easley. My foam flaming cowboy salamander was a flop (literally – it kept falling over), but it gave me a painting idea (props to Andy Hopp for the concept idea… oh, and for organizing the whole kickass convention and all). My CrashOctopus hats 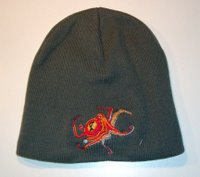 were a hit, and I sold some art! I sold two of the three “cute animals that begin with A” originals, as well as prints of said cuteness, and one pencil original. And the kicker – I won the Fan Favorite Corny Award! Everyone who attended could vote on their favorite, and ’twas me by a small margin. I couldn’t believe it. It made this convention even more rockin’ and I think Sunday was the best day ever. So far. I love you guys!!

And the best part: I got an original “butt print” from groovy artist Tony “Buns Of” Steele. Rock on.