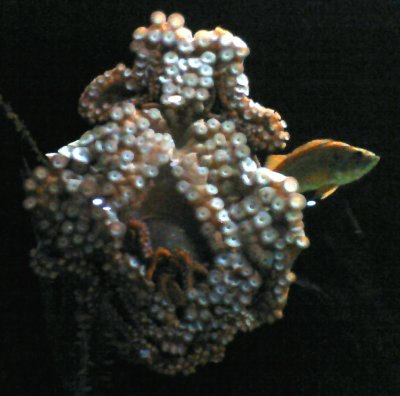 I volunteer at the Georgia Aquarium for the sole purpose of getting to know this guy. He’s growing so big – about 2 hand-widths now. Presenting his best side, sleeping on the glass, via crappy cell phone picture. With guest star Mr. Grumpyfish.

The Giant Pacific Octopus is the longest-lived: 3-5 years, although they’ve had five individuals since they opened the aquarium four years ago. This is the first male they’ve had. You can tell by that brighter orange squiggly end in the middle. It’s his hectocotylus – the end of the right third arm has no suckers and is much thicker and has a slit for inserting his manly, um, presents into the female. The Aquarium gets their GPOs from the Oregon coast. I don’t know his name but the first one was “Tako” (Japanese for octopus – check a sushi menu) and at the Tennessee Aquarium they have “Wonton.” Best names ever.