I admit it: I get lazy about trying new beers. You have $5 to spend on a nice big bottle of a beer you know is delicious, or $5 to spend on something you might not like at all… especially during this season, when some of my favorite beers are available for only a few months of the year. So I don’t try as many new ones as I should. Luckily for you, I’m going to have a series of beer-related guest posts from a certain “Tentacle Toast,” who has kindly offered to opine on beers I have not yet tried. 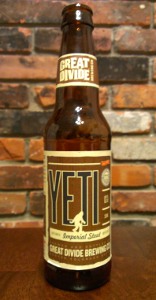 “First on the docket is the Great Divide Brewing Co’s Yeti, a most delicious imperial stout. It’s thick, dark, & malty, with a more than subtle coffee note. It leaves the glass tinged an ochre hue several minutes post consumption, to the point of being able to tell which side was tipped! 9.5% ABV.”