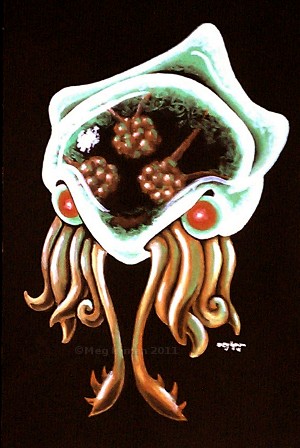 At conventions, I sometimes get requests for fan art. I am happy to do it, because it’s fun and inspiring. However, when I do, it’s always a cephalopod version of a well-known character, like a smurf or a superhero or the Metroid brain-eater thing (see above, done at a con, hence the crappy photo). I give it arms with suckers and make it “mine.” Also, it’s not my main body of work.

I was at Anime Weekend Atlanta this weekend, and it was a fairly good con. Not like prior years, but you know, the economy. The thing that bugs me about these cons (anime in particular) is that fan art is not only rampant and unoriginal, but it is exactly what the masses want. It is depressing to sit next to a table where someone is selling their “version” of some wildly popular character, which is really just that character in a new pose or with a slightly different shape – and that table is making far more sales than any table that sells original ideas. The fans love it. I don’t fault them for that, but the artists selling this stuff are at best uninspired, boring, and not growing as artists. Why should they, when they can sell others’ ideas? It is their loss, but it is sad nonetheless. Opinions?

p.s. I painted that black background and it is nearly flawlessly smooth. I had always heard of gouache’s magical matte finish, but had never achieved it… until now! Woot!